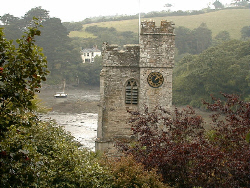 The beautiful River Fal starts it's journey to Falmouth and the sea in 'china clay' country ... a 'lunar' landscape of white man-made mountains and deep opencast pits. With the English channel on the other side, the river forms the outline of the Roseland peninsular, where the lovely St Just-in-Roseland church weaves it's tranquil spell.

Further east, the Fowey river rises in the brooding starkness of Bodmin Moor before cutting through green wooded valleys to it's namesake port on the English Channel. And the land on either side abounds with evidence of Cornwall's Celtic past - with churches and villages named after native saints - many from Ireland, Wales and Brittany. Leaving St Mawes, we head back up the coast, passing Caerhays Castle, Dodman Point, Gorran, The Lost Gardens of Heligan - and on to Mevagissey.

Once again the streets are very narrow - the village of Mevagissey clustering around it's inner harbour and fishing fleet. Buy some fresh mackerel straight from the fishing boat - they're cheap, good to eat and good for you! Or buy a pasty from the shop near the harbour - they have an expanded range of very interesting and tasty offerings! 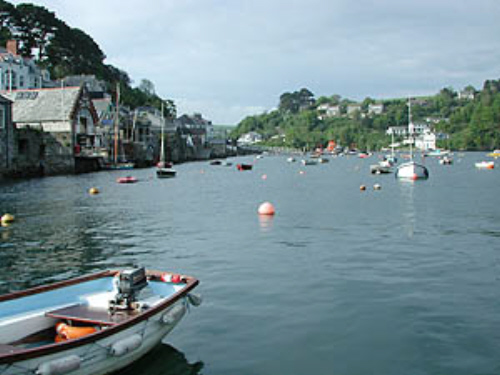 On now to Fowey via St Austell, passing and perhaps visiting the world famous Eden project, where vast biomes create the world's largest greenhouses, each of which re-creates one of the world's temperature zone. En route, we might also take a look at the lunar landscape of the China Clay area (for those who are interested!) - and the lovely Luxulyan valley.

We also pass close to Menabilly, the house occupied by Daphne du Maurier for many years - and it is possible to walk down to the cove and cliff walk where she wrote many of her books - and also visit the Church at Tregaminion where she worshipped.

Fowey is a very ancient town, with a deep water port which still receives ocean going vessels. It is also a leisure harbour with yachts and dinghies, and the home of a fishing fleet.

The town centre streets are very narrow, giving fascinating glimpses of the old waterfront and the harbour. And elsewhere there are wonderful views across the harbour, over to Polruan and out to sea.

Fowey to Lostwithiel via Lerryn

We leave Fowey taking the tiny Bodinnick Ferry to reach the other side of the river.

We travel up the east side of the River Fowey making first for Lerryn, which is a tranquil village at the tidal head of one of the Fowey river's tributaries - fascinatingly, there was a famous garden here in the C19th which rivalled the Tivoli Gardens in Copenhagen and were visited by Garibaldi! Not much to see of the garden now except a few overgrown statues.

We soon arrive at Lostwithiel- another ancient town - the head of the tidal part of the River Fowey and home to a number of antique shops and Restormel Castle. 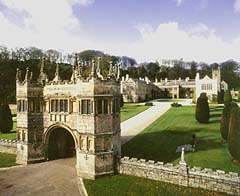 Plunging deep into BODMIN MOOR we visit TEMPLE CHURCH (site of a Medieval Church built by the Knights Templar - Crusades and all that - travellers must have been pleased to see it on wild, winter nights) and JAMAICA INN (focal point of Daphne du Maurier's famous book - and another wild spot on a bleak winter night!).

Back now to Bodmin and perhaps a visit to LANHYDROCK - a stately home in the 'grand' tradition run by The National Trust (click 'enter site', then click the 'green spot' below Bodmin) - wonderful Cornish Cream teas also sold here!